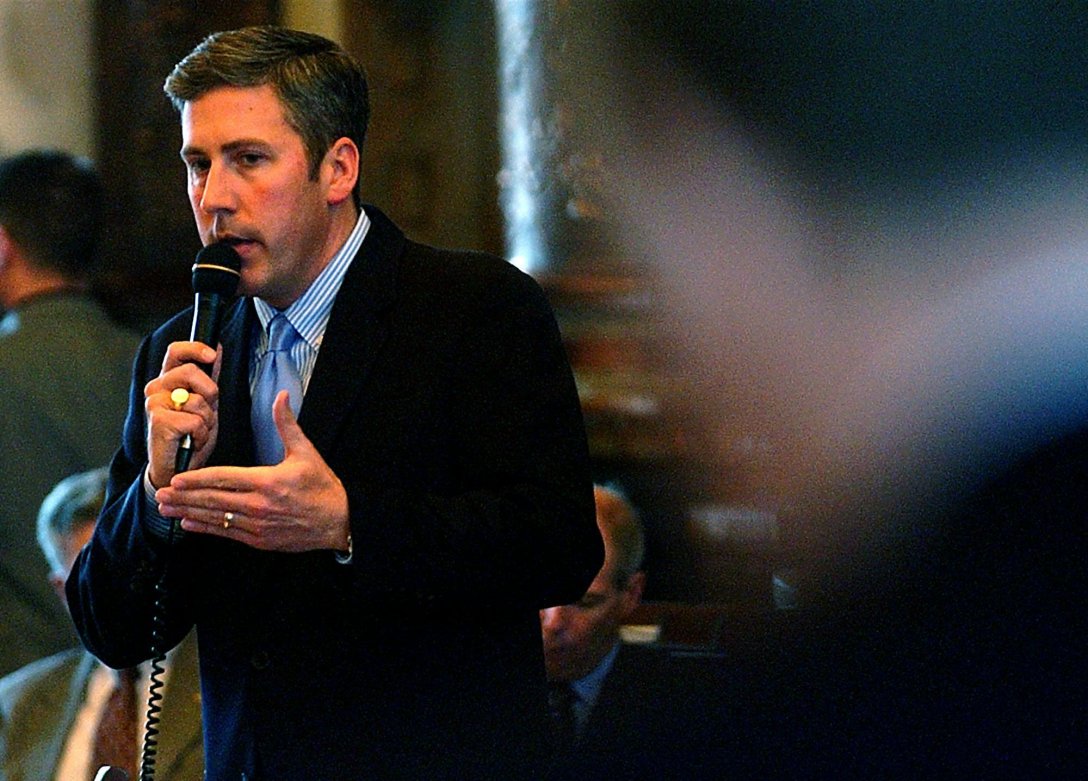 When news broke last weekend that the Kansas Republican Party, whose members were having their annual convention in Wichita, had voted to “oppose all efforts to validate transgender identity,” I wasn’t surprised.

LGBTQ activists in Kansas have heard that rhetoric before.

The Republican state committee member pushing the resolution said it was “motivated by love” for trans people who didn’t know what was really best for them.

That’s the same language people used seven or eight years ago when they testified against ordinances that would have protected us from discrimination in Manhattan, Salina and Hutchinson. Doing research for No Place Like Home, I heard it over and over again.

“I love all folks, the homosexual, the lesbian, because the word of God tells me to love them,” one self-described born-again Christian tells the Salina Human Rights Commission in Chapter 7. “I love them too much … not to speak out against something that can cause ruination to our nation.”

Last week it was former Gov. Sam Brownback’s son-in-law making that argument. He’s also the head of the Family Policy Alliance of Kansas, which is the latest iteration of the Kansas Family Policy Council, the outfit that fought those non-discrimination ordinances in Manhattan, Salina and Hutchinson.

When the party in power punches so far below its weight – officially approving blatantly disingenuous language that’s nakedly cruel to one of society’s smallest minorities – it says more about the party than its soulless platform language ever could.

But in Kansas, it’s always crucial to remember there are two Republican parties.

It hasn’t been that long since some Republicans were heroes to LTBTQ activists here. In the first chapter of No Place Like Home, a Republican senator named David Adkins, from the Kansas City suburb of Leawood, worked what some activists remember as “magic” to help prevent a same-sex marriage ban from going to voters in 2004.

In a speech that went on for hours, Adkins said what no other Republican, or Democrat,  had the courage to say.

“If you’re asking me if I support gay marriage, yes I do. Because homosexual marriage does not threaten my marriage, my life, my wedding vows, and I don’t know why we would believe that it threatens yours or anybody else’s,” he said, among many other things.

Here’s my favorite passage, one that feels just as relevant today:

“We are engaged in a culture war in this country, and we are polarized more than we’ve ever been polarized, with the exception perhaps of the Civil War. And that polarity is fueled by a politics that is ugly, that is driven by fear, and driven by hate. And we can either stand up to the bully, and say, ‘Not in Kansas, not in a place with a tradition of populism and acceptance’ … (Too many of us) are simply not willing to stand in the door and say, ‘Not today, bully.’”

Part of Adkins’ speech is still available for everyone to hear, thanks to efforts by another Republican, Stephanie Sharp, a member of the House who represented the Kansas City suburbs of Lenexa and Shawnee.

Even though more than a decade has passed since that day, it still felt fresh for Sharp when I asked her about it recently.

“I remember it so vividly,” she said. “At the time, there weren’t that many of us who brought our computers to the House floor. A couple of us were in House chamber voting on something, and the Senate was having this debate. We had our ear pieces plugged into our computers listening to the Senate’s live-streaming audio.”

Between bills, she said, “we would literally run over to Senate floor so we could watch some of (Adkins’ filibuster) live. Then there would be a staff runner who would come over and say, ‘You have to come vote.’ So we’d run back over and vote.”

Later, Sharp learned that one of the Statehouse reporters had recorded Adkins’ speech. Copies were in demand and Sharp got one on CD. Three years ago, she remembered she had the recording.

“The world deserves to hear this,” she thought, and posted it on SoundCloud, which is where I found the excerpts I use in No Place Like Home.

“Those are some good memories,” Sharp told me. “We had a really strong group of Republicans who were opposed to the amendment, and it was empowering to have someone speak truth to power who wasn’t afraid of it and wasn’t afraid of the voter consequences. A lot of us were going to vote this way because it was the right thing to do and if we didn’t win again that was fine. But no none spoke that more beautifully than Adkins.”

Sharp served two and a half terms in the House before leaving for a job in 2008, and now runs her own political communications consulting company, where she, like many other Kansans, works to elect new generations of moderate Republicans.

After the party passed its eye-rolling resolution last weekend, one of those moderate Republicans, Stephanie Clayton of Overland Park, quickly spoke out against it: 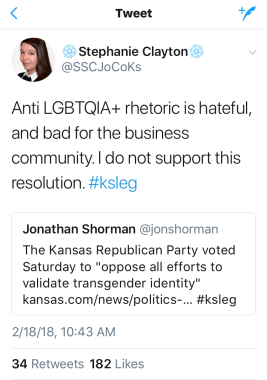 Such statements must be comforting to David Adkins. Ten years after his legendary filibuster, Adkins told me he’d done it as a sort of eulogy for moderation in his party. A couple of years before that speech, he reminded me, he had successfully challenged the Kansas attorney general, an anti-abortion zealot named Phill Kline (who would later lose his law license for abusing it). That race, Adkins told me, “radicalized” him.

“I knew I wouldn’t be running again. And I knew I would use one of these issues – whether it was gays, guns, or evolution – to make a stand to show that the Republican Party had left me.”

Adkins did not seek re-election. After a dozen years in the Kansas House and Senate, that year would be his last as an elected official in Kansas. He left the state and now leads the Council of State Governments in Lexington, Kentucky.

But even back then, Adkins knew Kansans were more accepting of LGBTQ people than their legislators would admit.

“I’d be riding the elevator in the capitol, and the women who worked as secretaries or bill clerks – regular Kansas folks – would say, ‘Our church choir director is such a nice man,’ or they’d talk about how they loved their florist,” Adkins remembered. “They were always women, and they could sense that there was a bully in the room and that the victim who was getting beaten up didn’t deserve it. These were ladies from the Methodist or the Presbyterian Church, and I thought, ‘Thank God for the gay choir directors of Kansas.’”

Reporting for No Place Like Home taught me there were plenty of other Kansans who felt the same way as those church ladies, and not just about their choir directors – about their neighbors and family members, too.

And midterm elections are on the near horizon, so Kansas voters will soon have more chances to let the world know which Republican Party they really want to represent them.

1 thought on “One important thing about Kansas politics: Not all Republicans are against us” 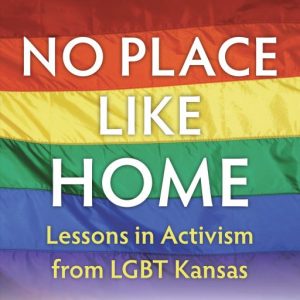